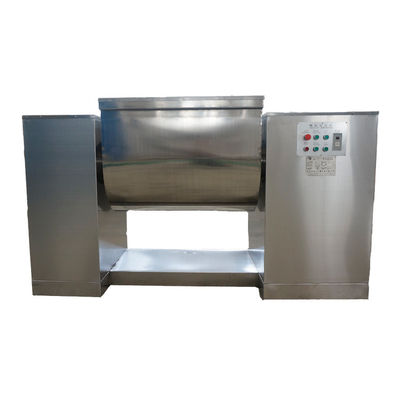 The whole machine is made of stainless stain, its horizontal type mixer. It’s widely used for mixing of powdery or paste material in pharmaceutical, chemical, foodstuff.

The Machine through mechanical rotation to drive S type agitator, promote the materials reciprocating flipping, uniform mixing. When operating using electric control, can set up time of mixing, then automatically stop, so as to improve the mixing quality of
each batch.
The trough mixer is mainly composed of five components
1. Stirring reducer
The stirring reducer is the main transmission structure of the trough mixer. It is located on the right side of the trough mixer. During operation, the motor installed in the base machine drives the worm and worm gear through the V-belt, and drives the mixer with a deceleration of 1:40.
The worm gear shaft is hollow and is equipped with a fixed key, so that the stirring paddle can be freely assembled and disassembled. There are 2 ring screws on the top of the reducer, which are used for assembly, disassembly and installation.
The end cover is equipped with a screw for positioning the high-speed stirring paddle, which has been adjusted at the factory, and generally does not need to be adjusted during use.
2. Mixing tank
The mixing tank of the trough mixer is a U-shaped body, made of stainless steel, with a stirring paddle inside, which lies on the stirring reducer and the pouring reducer.
3. Feeding reducer
The feed reducer controls the positioning angle of the mixing tank. It is located on the left side of the tank mixer. During operation, the motor installed in the machine base drives the worm and worm gear through the V-belt to drive the mixing tank to rotate within a certain angle range, so that the The mixture is poured out one at a time.
4. Machine base and motor device
The base is an integral structure. The motor is installed on the movable plates on both sides of the base of the trough mixer.
The upper and lower parts of the motor can be adjusted with a screw, so that the V-belt can be tightened to a certain extent and the transmission force can be maintained.
5. Electrical control box
The electrical control box controls the movement of the trough mixer.
Application advantages of Mixer Machine
1. Good dispersion: The equipment completely solves the problems of low uniformity and dead angle caused by different specific gravity of materials. This equipment adopts the mixing structure of five-axis with flying knife mortar, which can effectively disperse various short fibers.
2. Wide range of use: The equipment can meet the production of dry mortar with different performance requirements. Such as: masonry mortar, plastering mortar, polymer mortar required for thermal insulation system, polystyrene particle moisturizing mortar and other dry powder mortar.
3. Simple and convenient to use: the equipment has a small footprint, simple operation, low energy consumption, and can produce 5-8 tons per hour.
4. Long service life: The vulnerable parts of the equipment are all made of high-strength wear-resistant steel. It has the characteristics of long service life.
Product Show of Mixer Machine

Our services cover all industries and reach all parts of the world.

描述 描述
Get a Quote